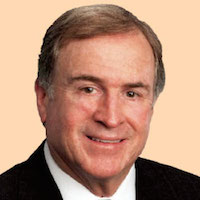 Outback Steakhouse
Chris Sullivan is co-founder of the Outback Steakhouse restaurant company. The first Outback Steakhouse was opened in March 1988. From 1991 to 2005, he was CEO of OSI Restaurant (parent corporation of Outback), after serving as the first President of the organization. In 2007, OSI Restaurant was sold for $3.1B to Bain Capital Partners and Catterton Partners. Outback has 968 locations worldwide and also operates over 300 locations of Carrabba's Italian Grills, Fleming's Prime Steakhouse and Wine Bar, Roy's, Cheeseburger in Paradise, Bonefish Grill, Paul Lee's Chinese Kitchen and several other hospitality-related businesses.
Back to Inductees