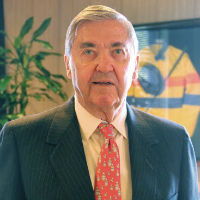 Born in Lebanon, Kentucky, Jim Thornton and his family soon moved to the Louisville area. After graduation, he joined with Gilbert Dance and Alfred Mallory to establish the “Dixie Dance” gas stations. That experience led Thornton to open his own station, and in 1955, further encouraged a joint venture with Ashland Oil that expanded into 150 Payless stations in 22 states by 1966. Thornton sold his Payless interest to Ashland Oil but remained an Ashland board member until 1971. He founded Thornton Oil, which blossomed to 40 units within 2 years. Thorntons ranks as one of Kentucky’s largest privately-held companies with more than $2.3 billion in annual revenue. It recently was ranked 250th in Forbes magazine’s annual list of 500 largest privately held companies.